POW status during the Great War 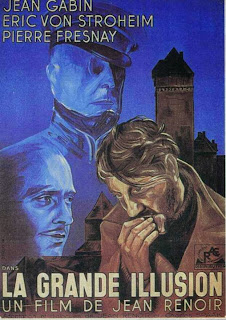 The following selection was deleted from the chapter The Illusions and Realities of Total War in That Line of Darkness:The Shadow of Dracula and the Great War (Encompass Editions, 2011) for reasons of space.


Depending on their status, the prisoners-of-war experienced both material deprivation and psychological trauma. Because the belligerents generally abided by the rules of the Hague Convention, they generally treated POWs better than what a later generation received in the Second World War. Officers, who were not even required to work, were treated considerably better than enlistees. Jean Renoir’s 1937 masterly antiwar film, La Grande Illusion, conveys class distinctions, but in the end national allegiance trumps class. Although all the French prisoners-of-war are officers, a French enlisted soldier, Maréchal, who has worked his way through the ranks, is sent into solitary confinement for leading the singing of the Marseillaise during a theatrical review, a punishment that would not have been visited upon the French aristocrat. The German officer in charge of the medieval castle, Count von Rauffenstein, still clings to the notion of an international brotherhood of class that transcends nationalism which he and his immaculately dressed French counterpart, the aristocratic and fellow professional officer, Boeldieu, belong. Although he displays a haughty disdain for his fellow prisoners in the first part of the film, by heroically setting himself up as a decoy to allow Maréchal, the man of the people, and the Jew, Rosenthal, to escape, Boeldieu aligns himself with an inclusive civic French nationalism that embraces all classes and ethnic groups. But the film for all its memorable moments sanitizes the physical conditions of the men. In the real camps that vastly varied in quality even those that housed officers, hunger remained an urgent rendered it difficult for the Germans to feed their prisoners. It was only through the efforts of the Red Cross that food parcels from France generally arrived saving the prisoners from starvation. Still, about 20,000 British servicemen died in German prisoner-of-war camps from ill-treatment, starvation and disease, mostly from dysentery.  It was much worse for POWs on the eastern front where malnourishment and disease claimed a much larger number of lives.

Besides nutrition, lack of sanitation, dirt floors and bunks that collapsed constituted the living quarters of some Canadian POWs. The work assigned could range from relatively pleasant agricultural work to dangerous work in mines or railroads presided over cruel overseers. The POWs also contended with psychological difficulties since there was a stigma associated with soldiers who surrendered “because of the persistence of the nineteenth-century military ethos, which held to be captured could have only resulted from some personal failing on the part of the soldier.” The belief that a missing person was too good a soldier to be taken prisoner encapsulated this form of thinking. The stigma was reinforced with military regulations that required every returning POW be subjected to a board of inquiry to determine whether there was some misconduct on his part. In terms of the vast numbers who fought relatively few surrendered on the western front, in part because of this stigma, that might account for the reluctance of soldiers to include this experience in their memoirs or fiction after the war. There were also fears that they would be summarily executed by the enemy, one reason being to avoid a scenario in which the enemy on pretending to surrender would then fire at soldiers whose defenses were relaxed, and that they would be shot by a senior officer if they attempted to surrender. In his memoir, Robert Graves, acknowledged that prisoners were murdered on the way back to headquarters, the worst offenders being Canadians and Australians, out of revenge for the deaths of friends, jealously of the prisoners spending the rest of the war in a comfortable prison, military enthusiasm or fear of being overpowered by the prisoners.  Despite these dangers, soldiers on both sides did surrender or face dying, and when they were convinced that they would not be shot, they surrendered in large numbers.

For example, on March 21, 1918, the first day of the last major German offensive, storm troopers, because of their overwhelmingly numerical superiority, surprise artillery bombardment and the deployment of a toxic gases, captured over ninety eight square miles and 21,000 British soldiers (even though German casualties vastly exceeded that of the British). In the subsequent Allied counter-offensive launched in the summer of that year, an estimated 340,000 Germans surrendered, convinced that the war was lost, between July 18 and the armistice. Probably some of the prisoners saw the camps as preserving them from the trenches but they seemed to have been a small minority. They were more likely to experience "the doldrums" as shame and depression—Captain Charles de Gaulle, wounded and captured at Verdun, described confinement as “a grief that will end only with my life”—could harden into a “barbed-wire psychosis,” a feeling of uselessness brought on by his separation from his family and his country, his lack of privacy and an ignorance about the duration of the captivity.

An antidote to the shame and recover his honour was for the prisoner to expend his energy on attempting to escape, a facet of prison life that is vividly rendered in La Grande Illusion. He regarded the need to escape as his duty so that he could rejoin the struggle. Those that attempted to escape and recaptured faced even greater punishment from beatings, starvation diet or long periods of solitary confinement, even though there is no evidence that they were executed after capture. Or they were transferred to a disciplinary camp where they could be used as human shields returned in the war zone and placed in the humiliating position as combatants, but against their own country. Their situation was materially similar to the civilian men and women who were shipped to work behind enemy lines and while the artillery and guns of their fellow citizens put them in constant danger of being killed or wounded.
Posted by Robert A. Douglas at 08:47